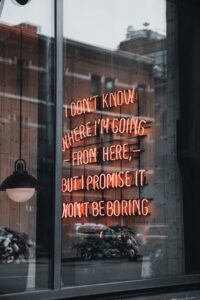 I’ve been in training for windows virtually my whole life.  When I was just a little boy, I had the privilege of watching both my dad and his talented friend work on installing windows. I was being trained and I didn’t even know it.

As a young boy, I remember waking up and running out the door just to catch my dad before he would leave to drive over to Benada Windows in Minneapolis. Benada Windows was one of the first huge window companies to get involved with building vinyl windows. They had a whole setup, from cutting the glass to having two guys working as a team to sandwich the glass panes together.

Who would’ve thought that my life experiences would be worth anything in the business world? From riding (and crashing)  go karts as a kid to hockey and many other wild sports, I guess I would say I’ve dabbled in about every activity imaginable. My talents range from drawing portraits to boxing. I practiced boxing as an amateur off and on most of my life and trained with Brian Burrett at his gym. He is an American boxer who competed in the Olympics.  While training under him, I competed against several professional boxers.  Not to stop there, I even excelled in moto cross. In my day I could skip the woops and nail 100 footers and triples. Eventually many of these activities began to fade in my life as I entered the workforce after high school.

So many experiences in my life helped to develop skills that would feed into my drive to build a premier window company.  Not only did I pick up skills from my dad, but I also gained valuable skills from other activities as a youth.  From testing out my carpentry skills building tree forts to learning how to properly strap down loads while loading up dirt bikes on our trailer, the skills I’d later need in business were accruing.  Even lessons learned in high school and the special sales training I received while working at Best Buy and dealerships all would be valuable skills to help grow a business.  Even my experiences in sports taught me to work hard, build a solid team, and never give up.

Although, at the time, I did not feel I was picking up needed skills, one day it hit me that I was ready to take on the challenge of starting my own business.  As I look back over my life, I now see:  I WAS BORN FOR THIS!  However, there is still more to go through before finally realizing the dream of running my own business.

After high school, I found myself working as a car salesman in Virginia. After doing this a while, I made the decision to go back to Minnesota and began learning carpentry full time with a handyman service in St. Paul. We remodeled many homes and I learned so much more on top of what my dad had already taught me. It was a great learning experience.

However, before long I found myself driving around a 3500 23’ long freightliner Mercedes. Here I was, a 20 year old waking up way earlier than most 20 year olds, as the job started at 5am. I felt quite accomplished, I had just upgraded from a one bedroom to a two bedroom apartment. Life was pretty good, I was working for my Uncle John’s delivery company, delivering sodas and snacks to gas stations across Minnesota. He was most impressed that I could leave in the morning with a truck full of sodas and snacks and come back home with the truck empty. I mean here I was a 20 year old making $1000 to $1250 a week. I felt like I was living the American dream, I was making $50,000 or more a year. It was great, unfortunately a few months later my uncle was injured, and I was let go from this job.

I moved on from that job to pipe insulating for 3 years. I would help build hospitals and some of the biggest power plants in Minnesota. I was once a leading insulator for the turbines in these power plants. I felt pretty important since the turbines are the most important parts of a power plant. There were moments where the work would slow down, and I would find myself laid off for a few weeks. During those times, I would find myself helping my dad install windows like I did during the summers of my teenage years.

Believe it or not, I’ve been self-employed since I was 8 years old. I remember having a little orange shovel and would shovel my neighbor, Penny’s driveway. I was also working with people on my block repairing bikes, shoveling, snow blowing, repairing decks, and so on.

I am so thankful to have had the life I’ve had, full of experiences which grew me into the man I am today.  All these experiences prepared me to finally realize my dream of running my own window and home improvement company.  Not only do I feel I was meant to be a window guy, but I also know I’m supposed to be here helping families right here in Shenandoah Valley.

I hope this stroll down memory lane has been interesting.  I look forward to building many more memories as I continue to grow as a business owner and as a person.  Thanks for taking the time to read my blog.