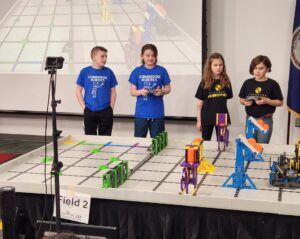 Back in the spring I was approached by my friend, Allen Burton of Right Stuff Web Development, to see if I’d like to join him in sponsoring a new robotics team for a few elementary school students at the church (Cornerstone Christian Fellowship).  He didn’t have to ask twice.  I love seeing kids get a chance to do cool things like build robots and compete.  So I helped with some of the costs of getting a new team up and running (getting parts, registration fees, t-shirts, etc.).  I’ve enjoyed hearing stories of how the young ones have been building and preparing to compete in a VEX IQ tournament.

Well, this weekend they finally got their chance to compete.  The three kids on the team loaded up the van and traveled to Culpeper to compete against 14 other teams.  The challenge this year is called “Slapshot” and involved building a robot that could get some little plastic hockey pucks and hitting them down the field into various scoring zones.  The team had a blast.  They turned out to be very competitive for a first-year team and are eager to go to a second tournament next month after beefing up their robot some more.  I told them that their next challenge would be to build a robot that could install windows so I can hire it to be part of my crew 🙂  I am so thankful to have the opportunity to help out a group of kids like this.